The Dwarven Treasure coins are 2 inches in diameter and have their own custom icon. This edition features pearl and sparkle enamel on 24 karat gold. The edition name is the Dwarvish name for the moon. 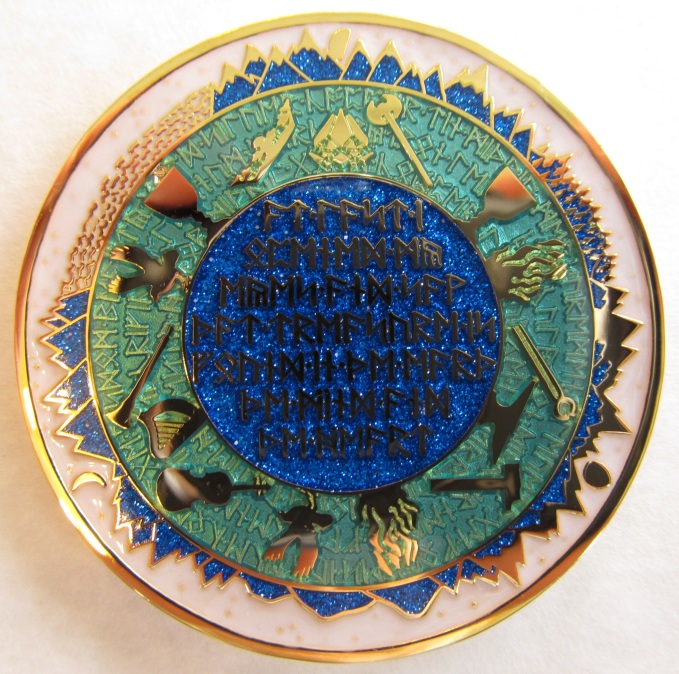 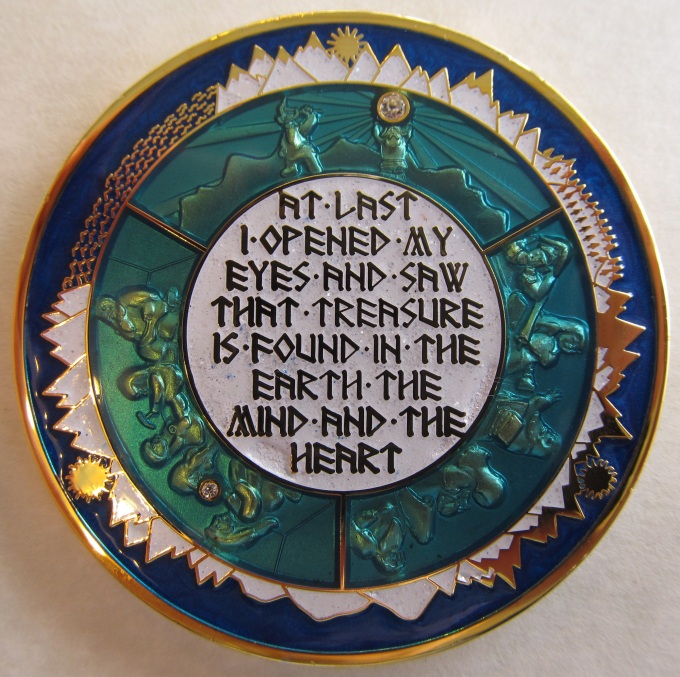 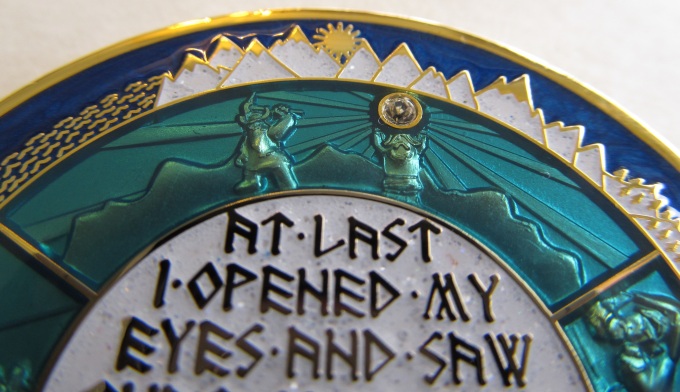 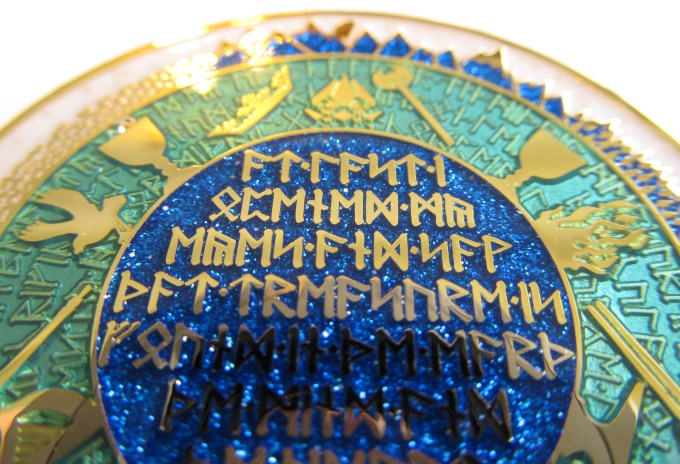 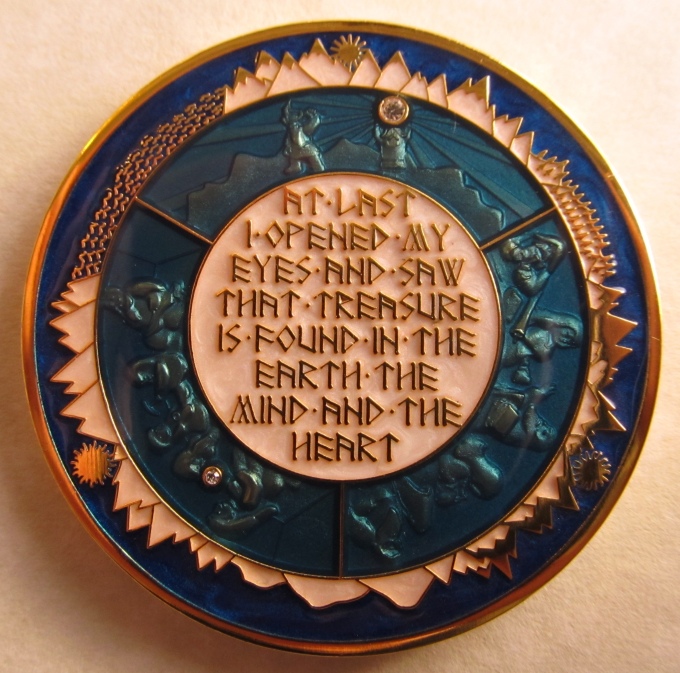 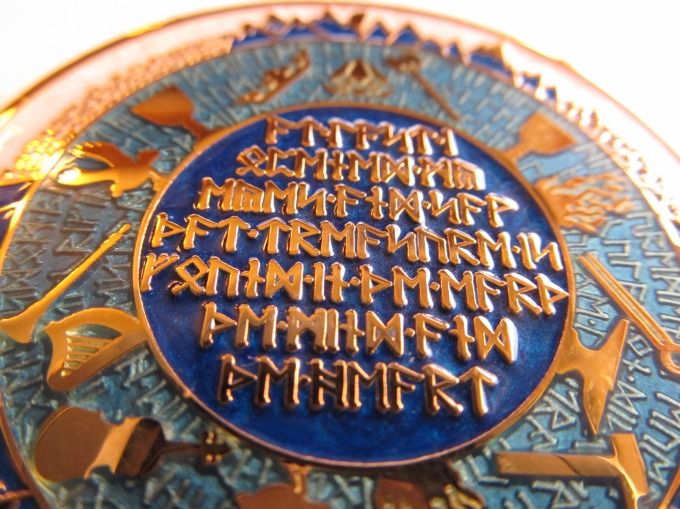 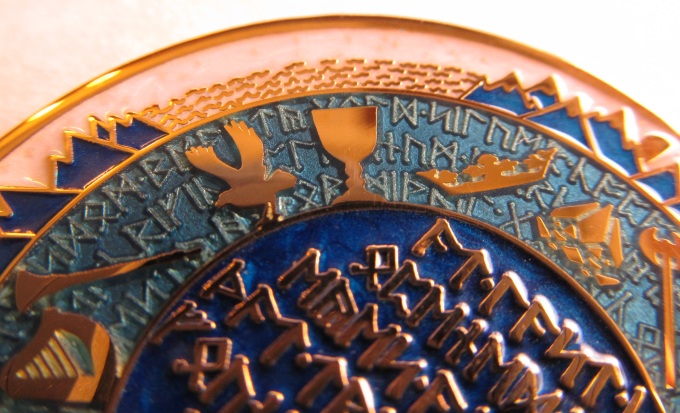 Many ages ago, when the world was still new, there was a Dwarf woman named Yaruhha who had a wealthy husband and many children. Her life was much to her liking, so she grew happy and quite plump. All who looked at her with her beautiful clothes, her healthy round shape, her strong children, and her powerful husband, wished that they could be in her place. She had everything that a Dwarf could want.

The Prince of Air also saw her happiness and he grew jealous because he did not have a solid body and could not have the things that gave her joy. She saw his distress, but she was proud and mocked him in a way that seemed clever and harmless to her.  The words that she believed were soft were knives to him and his envy grew into rage. He swore that he would bring her low. In response, she just laughed and said that he should learn to cheer up. “Besides”, she said, “you are made of air and cannot touch me.”

It was true that the Prince of Air could not lay hands on her, but he compelled the clouds and the mountain winds to create a winter that was colder and drier than anyone could remember. Food became scarce, the animals fled to other lands, and a sickness fell upon all of the Dwarves. Her wealth, her health, her joy, her dedication to being a good wife and mother could not prevent the winter from taking her children and husband away. She still had many fine things, but without her children’s laughter and her husband’s kind face, the gold and the fine clothes only made her feel tired. Her health abandoned her and her beautiful plump body became thin and ugly. Her soul shriveled too. She grew ill tempered, and then mean, and finally cruel. The other Dwarves tried to look past her anger but when she became like a poison to all who were near, her clan disowned her. They shouted out that she had become like a wolf; they gathered all of their strength and threw her into the night sky.

When she came to her senses, she realized that now she was truly alone with only empty darkness as a companion. In those days, the night sky was just frightful blackness. She began to cry, first loudly, but then more and more softly until her sobs were just a whisper. At once, she heard louder crying. She said to herself that now she was losing even her sanity because her own crying was starting to sound like it belonged to someone else. “Wait”, she said to herself, “truly someone else is crying”, but who would be in the darkness with her? She crawled blindly on her knees and felt with her hands, searching for whomever was so in need. She cried again, but not for herself. Her body, her mind, and her heart all ached to comfort those tears. Her whole being longed to say “hush, it’s all right, I’m here with you”.

At last her hands felt a tiny baby. She clutched it to herself and finally she could say the words –  “hush, it’s all right, I’m here with you”. She asked the baby where its mother was and the child answered that it had no mother. “Of course you have a mother”, she answered. “Everyone was born from a mother and we will find her”. The baby cried louder still and sobbed “I was never born”! It was then that Yaruhha realized that she was holding a soul that had not yet been sent to Midgard to be born. She held the child close and said, “I will bounce you on my knee and I will sing to you. When you are afraid, I will make you laugh. Since you have not yet gone to Midgard and you have no mother, I will be your mother”. The baby smiled so brightly that its face began to glow with joy like a little candle. Yaruhha did not know that she returned the baby’s smile and she began to glow too. In the distance she heard another baby crying and like the first, it was a child who had not yet gone to Midgard so it was all alone. When she told it that she would be its mother, the second baby also shone like a little candle and Yaruhha glowed even more brightly.

She heard many voices crying in the darkness, but she knew that she could not reach them all, so she called out for help. When she had been crying only for herself, her voice had not been strong enough to pierce the darkness, but now that she needed help for all the babies, her voice reached everyone. The Dwarves that had thrown her into the sky heard her, but they said that she was too evil and they would not help. She asked the animals, the bears, the birds, and the fish to help her, but they remembered her cruelty and said that they were afraid of her. At last the rabbit spoke up and said, “I used to have many children, but the wolves and the cats took them all away from me. I can understand why you became cruel; you were driven mad from grief”.

No animal could ever hope to run or fly up as high in the night sky as Yaruhha, but the rabbit said, “ a mother who is looking for her children has great strength and I too have lost my children”. She leapt as hard as she could and her powerful legs brought her to be with Yaruhha. The rabbit ran to every corner of the sky and brought all of the little souls to the Dwarf that promised to be their mother.

Each unborn soul that she found became her baby and she became their mother. When she found them their faces lit up with joy and she glowed back at them. In time, she was surrounded by countless little candles and she glowed so brightly that her light filled the whole sky. Along with her joy, her health and beauty returned. She became so plump, that she is now the globe that we all see today.

Some foolish people say that real strength only comes from axes, hammers, and swords, or they say that a forge is the greatest place of creation. Battles do bring wealth and forges do create wonderful things to hold, but did they ever match Yaruhha’s deed? Her love transformed the terrifying black void into a place of beauty. When Humans Elves, and Dwarves look into the night sky, they say that she is beautiful, but most of them have forgotten why. They do not remember that before they were born into Midgard they were all alone in endless darkness. Then they felt soft paws scoop them up and bring them to a light that promised to sing to them in the night. She would bounce them on her knees, and make them laugh. They have mostly forgotten, but in their dreams they remember Yaruhha.

Note – Elves and humans find thinness to be desirable. Dwarves, however, see it as a sign of disease or mental illness. Their ideal of beauty in a Dwarf woman is not nearly as rotund as the moon, but it is still on the plump side.